The hall above the Allen Hardware Store in the new village of LeRoy was the first home of the First Presbyterian Church with the Rev. A.C. Ruliffson as pastor. The Presbyterian and Methodist faiths worshipped together until the 1870's, when the first Presbyterian church was erected. It was dedicated in 1871. In 1895; an addition, including Sunday school rooms, was added and the manse built.

The "Mite Society," an early forerunner of the Ladies Guild, was organized at this time. Their first project was the digging of the basement under the church in 1910. This group is presently known as the Presbyterian Women's Association. In 1919 the Presbyterian and Baptist Churches attempted a merger. This project was dissolved after a trial period.

A building committee was organized in 1953 and the present structure was dedicated in 1960 with membership at 286. The manse was built in 1962 on the original church ground. Twenty-eight ministers and students have served the Presbyterian Church. 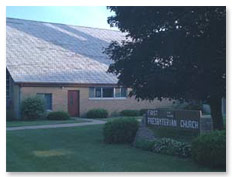