The LeRoy Lutheran Church was the first such congregation in the LeRoy territory. It was organized on March 5th, 1867. It's first pastor, Rev.Trev Tobias Larson, arrived in 1868.

In 1870, the congregation purchased the Old Stone School in "Old Town" and used it for 19 years. The question of where to locate a new church caused a rift in the congregation and the church split in 1890. The LeRoy congregation built and dedicated its church within the city limits in 1894. The West Lutherans built 5 miles to the west of LeRoy in 1891.

The Ladies Aid was formed in the spring of 1888. Through their efforts they installed a church bell in 1911.

The two churches were reunited in 1920 under the pastorship of Rev Olaf Linn, but continued in separate buildings. On May 29, 1950, the two congregations merged with Rev R. M. Christenson as pastor. The wood structure in Southwest LeRoy was found to be inadequate and a vote to build a new church was carried on February 18, 1952.

The Women's Mission Federation which met for the first time in 1919, became affiliated with the American Lutheran Church Women in 1960. Present membership is 317.

A ramp and lift made the church more easily accessible to handicapped persons in 1980.

Worship Times
LeRoy Lutheran and Trinity Lutheran in Ostrander have combined into a parish. Worship Service times change throughout each year.  Please check the church website for current worship times.

Sunday School is at 9:30 AM at both churches from the Sunday following Labor Day through the Sunday prior to Memorial Day. 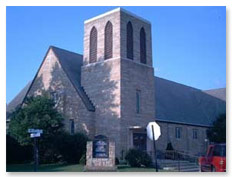